In terms of packing a nutritional punch, there are few foods which score as highly as sprouted seeds and pulses, like sprouted broccoli, alfalfa, radish, mung beans, chickpeas and lentils.  The process of germination, or sprouting, is demonstrated to increase levels of nutrients, including vitamins, minerals and protein, while reducing anti-nutrients such as phytates and tannins 1.  After just 3 days of sprouting, it is suggested that a small quantity of sprouted cruciferous seeds such as broccoli, may potentially deliver the equivalent cancer-protective nutrients as a much larger quantity of mature vegetables of the same variety 2.

Germination is a complex process during which various compounds in the seed, grain or legume change dramatically.  Fats, carbohydrates and proteins within the seeds are broken down in order to provide energy and amino acids for the developing plant 3.  These changes increase the availability of essential nutrients and bioactive compounds, such as phenols, which in mung beans, can increase by 2010% after sprouting 1.  Antioxidant activity of chickpeas is shown to increase significantly after germination 1, while radish sprouts are reported to have the most potent antioxidant capacity 4.  Sprouts have a high protein content (21-28%) and are a good source of calcium, phosphorus and certain vitamins such as vitamin C, which increases during the sprouting process 4, 5.  Indeed, across many parameters, the nutritional content of sprouts are significantly higher than their seed format 3, 4, 11, with some nutrients being assessed at 10 to 100 hundred times greater than in the mature plant2. 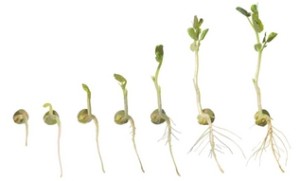 Just as humans require antioxidant nutrients to balance the oxidative damage caused by everyday body functions and factors like stress, pollution or dehydration, plants also protect themselves with antioxidant compounds, which offset the damage caused by photosynthesis, respiration and other cellular reactions 5.   The sprouts of cruciferous vegetables such as radish and broccoli are good sources of the body’s most important antioxidant, glutathione, which is produced by the liver and can neutralise free radicals 6.   Broccoli sprouts have also been used in studies to demonstrate the potential anti-viral properties of the sulphoraphane compound which they contain 7.

”Sprouted pulses are more easily digested, without the common side effects of bloating and gas”

One way in which plants protect themselves from being eaten by insects is with compounds such as tannins, which act as a deterrant or toxin 8.  Like other types of phenolic compounds, tannins can influence the colour, smell or bitterness of leaves and protect against UV damage 9.   They are known as ‘anti-nutrients’ because they can interfere with the way humans absorb certain vitamins and minerals.  Phytates provide an important form of energy storage for plants and are found primarily in the hulls of seeds 10.  However, they can have a similarly negative impact on human mineral levels, as they bind to calcium, magnesium, iron and zinc, making them unavailable for absorption. Soaking and sprouting seeds is shown to reduce the levels of both tannins and phytates 1,4,10, which is why it is also beneficial to soak other plant foods such as nuts, beans and grains.  Removing the hulls of seeds reduces levels of phytates even further and is easily done after sprouting 10. 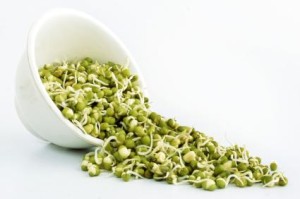 Furthermore, sprouting is shown to increase the fibre content of seeds, while reducing the proportion of carbohydrates (possibly used for energy in the germination process), meaning that sprouted seeds have a fantastic nutrient profile, high in vitamins, minerals, protein and fibre, while being low in fat and carbohydrate 3.  They are also more easily digested by humans 3, without the common side effects of bloating and gas which can be caused by consuming non-sprouted pulses.

”Soaking and sprouting seeds is shown to reduce the levels of both tannins and phytates , which is why it is also beneficial to soak other plant foods such as nuts, beans and grains.”

Overall, the evidence is clear that adding sprouted plant foods to our diet is a simple, inexpensive and delicious way to boost our nutrient levels.  They are best eaten raw (in salads, wraps and smoothies), but may be lightly steamed, added to stir-fries, soups and stews, or even ground into flour.  Sprouts are widely available in supermarkets, but the sprouting process only takes a few days and is simple and cheaper to do at home.

Alfalfa is very easy to sprout if you are new to this process and is a lovely, mild addition to salads and other dishes.  Organic alfalfa seeds are available in health food stores and some garden centres, along with inexpensive sprouting trays or bags.  Simply soak a tablespoon of seeds in a bowl of water for around 8-12 hours.  Place the seeds in the sprouting tray or bag and rinse carefully, ensuring that you drain the water completely.  Leave in a bright spot, but out of direct sunlight and continue to rinse and drain them at least twice a day for 3 days. (I find that if I leave them near the kitchen sink, it’s easy to remember to do this and it only takes a minute.  If you forget to rinse them, they can be susceptible to mould).

By day 2, you should see roots and shoots starting to emerge and by day 3, tiny green leaves will start to show.  Once the leaves are bright green and the sprouts are between 2-5cm long, they are ready to be eaten (usually around day 4 for alfalfa, but this varies with each type of seed or bean). Rinsing and gently rubbing the sprouts helps to remove the brown seed hulls and you should then store the alfalfa sprouts in an airtight container lined with kitchen paper and keep them refrigerated.

Once you have mastered alfalfa, you can apply the same method to chickpeas, lentils, quinoa, adzuki beans, pumpkin seeds, sesame seeds and even raw, unpasteurised almonds or peanuts.  Use them in your usual recipes, while enjoying the additional nutrient content.